Rangefinder Magazine – The Story Behind #Sarinotsorry

The Story Behind #sarinotsorry, an Ambitious Insta-Forward Portrait Series in Sri Lanka

Inspired by photojournalist Steve McCurry’s famous photo of Sri Lankan stilt fishermen, who sit perched far from shore atop crude crucifixes of sticks and twine, dangling fishing rods into schools of fish. Grier decided that she had to seek out these male fishermen near Galle Fort in Sri Lanka, where they are still practicing the vanishing tradition, and to pose a powerful woman, influencer and model Rosanna Cordoba (@rosanna_cordoba), in a sari out in the ocean

This past April, Laura Grier, otherwise known in the industry as the “Indiana Jones of adventure, travel, and destination wedding photography,” embarked on a social media and photography adventure workshop with 12 thrilled participants in tow. Says Grier: “We wanted to use our voices and multimedia options around us as photographers to create impactful, striking imagery. Our #sarinotsorry photo series showcased each of us modeling a one of a kind, hand-painted sari in iconic locations all across Sri Lanka.”

The locations across Sri Lanka that Grier chose to shoot in were each, she says, “very curated and special. To be modeling a female Sri Lankan designer’s saris and learning how to tie them was another empowering factor.” Here, Grier shares how she created social buzz along the way, as well as some of the stories behind these epic shots.

RF: BEYOND SHOWING BEAUTIFUL SARIS, WHAT WAS THE CONCEPT BEHIND EACH IMAGE?

Laura Grier: Each one shows a powerful woman who overcame adversity to get there. And the most powerful takeaway of all ended up having nothing to do with photography or even social media. Instead, we were able to leverage both of these tools to be able to share our incredible stories and inspire each other along the way.

RF: HOW MANY PLACES DID YOU VISIT IN SRI LANKA?

LG: The trip began at the Teardrop resort Wallawwa in Seeduwa, 20 minutes from the airport. First stop: Ulagalla (Uga Escapes), where we explored Sri Lankan history, then Buddhism and archeology in Anuradhapura, Polonnaruwa and Sigiriya. The second part of the trip was an elephant safari to observe wild elephants at the Kaudulla National Park. Next, we went to Teardrop resort Camellia Hills, where we took a scenic train ride through tea plantations, natural forests and waterfalls. There was also a pilgrimage to Adam’s Peak, exploring Galle (Teardrop resort Galle Bazaar) and Sri Lanka’s colonial history, and ended at Teardrop resort Kumu Beach.

RF: HOW DID YOU CREATE BUZZ FOR THE WORKSHOP?

LG: Floral artist and entrepreneur Sherene Hulugalle of Jasmine Vine (a destination wedding and event company based in Sri Lanka and the U.S., @marrymeinsrilanka) and I partnered with social media influencer Nastasia Wong, known as @dametraveler on Instagram. She has an account that empowers females to travel and I thought she would be a perfect addition to the workshop. Basically, the premise was to do shoots across Sri Lanka in some of the most iconic and “Insta-famous” locales and then set up shoots that we would post on Instagram. Each woman took turns doing an Instagram takeover on Nastasia’s account to get exposure and to learn how to do it. So social media, framing and strategy, storytelling and photography were all woven into a fluid and casual workshop.

RF: WAS IT HARD TO CONNECT WITH THE RIGHT PEOPLE ON LOCATION?

LG: Sherene helped organize and connect me with Sri Lankan artist and designer Romaine Ferdinands (@srilanka_on_silk), who works with silk and was happy to collaborate and showcase her work highlighting motifs that are indigenous to the region. 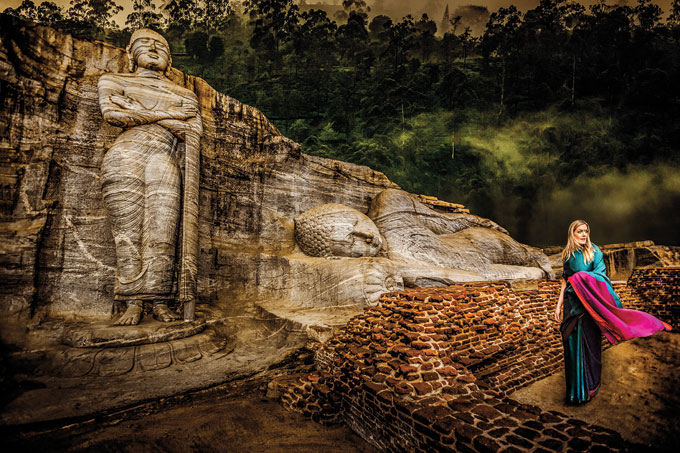 It was pouring rain and cold when we finally reached the walk out to the giant Buddhas of Polonnaruwa. When we got there, we started the photo shoot but were quickly stopped. You are not allowed to turn your back to a Buddha statue, so the only photo you can take is with your body facing Buddha. We corrected and started taking photos again, and I was having Mandy, our model, move her arms to make the sari fabric flow in the wind. We were quickly stopped again—no dancing or arm gestures are allowed in front of Buddha. No closed fists, no sudden movements, no laughing, no loud conversations, no singing…the list goes on. I finally asked what we could do in front of Buddha, and the guard moved Mandy’s arms and hands, like he was posing a Barbie doll, to allow her to be in the final pose that you see here, partially turned toward the camera and, of course, Buddha. At first I was frustrated, but then I realized how important this lesson really was: No matter how much we understand or think we know about another’s spiritual or cultural beliefs, it is so important when traveling to respect them and to not assume you know anything. This, out of all of the shoots, was the most restricting, and we only were allowed to take a few shots, but the entire moment of learning what not to do was actually one of the most important moments of all and more powerful than getting the shot. 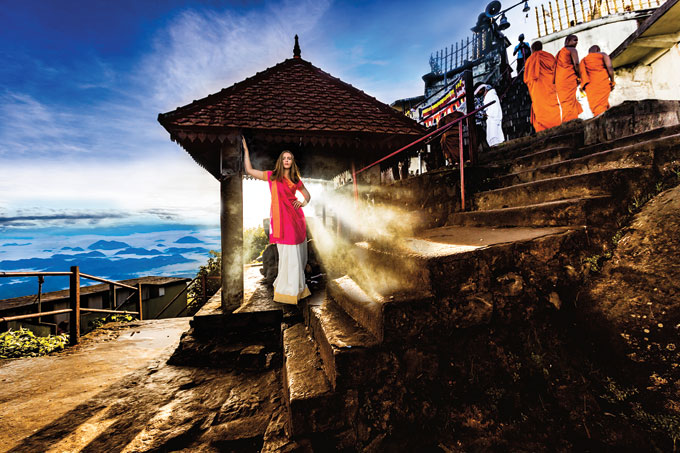 Adam’s Peak is Sri Lanka’s holiest mountain and each year, tens of thousands of pilgrims flock to climb its 5,500 steps and almost 7,000 feet of elevation. Although this place isn’t as “Insta-famous” as other peaks in Sri Lanka, we felt that spiritually, and as a lesson of ultimate perseverance, we had to do one of our sari shoots at the top after hiking for hours in the dark. We started out at 2:30 a.m. with backpacks filled with water and heavy photo gear, glitter makeup and long sari fabric. There were times I wasn’t sure we would finish, times I had to mentally push myself to finish. It became a sheer test of will long after my muscles gave out to make it to the top, but once we got to the top, we rang the bell and got Bethany ready for our photo shoot by doing her makeup and wrapping her in a sari alongside passed-out pilgrims and monks praying and lighting incense. The morning light beamed through the incense smoke and made this image just magical.

Deep in the middle of Sri Lanka, a massive column of rock juts out from the green tropical forest. It reaches 660 feet tall and features frescoes of beautiful women, graffiti and landscaped gardens. The rock is known as Sigiriya and holds a special place in the island’s cultural history. I wanted Kimberly and her colorful hair and jewel-toned sari to pose for this shoot, because I envisioned the top would be ruins of neutral-colored rock walls. We had no idea how beautiful the gardens and terraced ruins would be. We had perfect 360-degree views of the entire country below, and it was amazing to imagine this as a bustling palace hundreds of years ago, at the top of this rock in the middle of nowhere. At one point only male monks lived there, and now we were having a fashion shoot at the top! 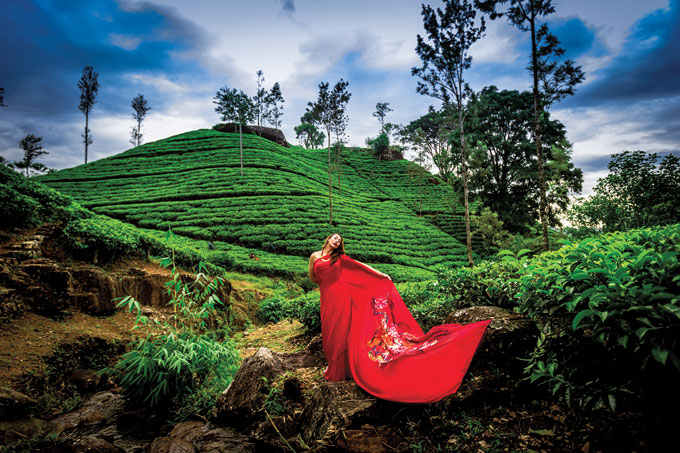 All Ceylon tea leaves are picked by hand by women in Sri Lanka, and over 20 percent of their population is directly or indirectly affected by the tea industry. Brittany Paradise, featured here, is a partner at Ferndell Coffee and Tea, which is based in the U.S. but its tea is produced here in Sri Lanka. It seemed fitting to have her model the sari in the origin of the company’s tea leaves. I love the striking red in contrast to the vibrant green terraced fields, but we had no idea that these fields were covered in leeches. As we were all focused on getting the shot, we were also getting our ankles attacked and covered in leeches. We spent the next half hour taking them off of each other, which is something that I’m sure the tea pluckers deal with every day. It is a sacrifice of literally blood, sweat and tears to produce something that represents relaxation, communal gatherings and new beginnings, and it’s integral to so many people’s lives. Brittany wanted to convey, through this shoot, the blending of her work, life and passion, and the struggles woven throughout.

1. Always have a storyline, message or running theme in mind. We created the hashtag #sarinotsorry because it promoted not only the female sari designers, but also women being unapologetic and fearless.

2. Present different perspectives. We each took turns taking over @dametraveler’s account, so it gave everyone an opportunity to tell their story in their own voice and gave her followers different views of the same trip.

3. Use all of your tools and everyone else’s outreach to help promote your project or trip. We all posted in unison and promoted our stories to all of our followers, before, during and after the trip.

4. Even if you don’t have a ton of followers, being engaged and answering questions along the way can help in reaching and inspiring those you want to interact with.

5. Be strategic and purposeful with your posts. Make sure that you curate your images and that they flow as an entire story when posted together. Post consistently, make sure you are tagging everyone and, even more importantly, geotagging all of your Insta-story slides and posts, so you can get a lot more followers from the places you are visiting—they are usually more engaged because they are nearby as well!

I'm so excited that Rangefinder Magazine featured our #sarinotsorry portrait series during our social media photography workshop across Sri Lanka!