Welcome to Palau, a small group of approximately 200 closely- grouped islands located in the Pacific, a few hundred miles east and south of the Philippines and part of Micronesia.  It is not easy to get to, but pristine and home to Jacques Cousteau’s favorite dive site!

I had never been officially "OFF THE GRID" before I went on this trip, so I was nervous about not having ANY contact with the outside world, being able to share stories on social media, being overwhelmed with work when I got back, or god forbid some sort of emergency happens or the world collapses before I got back....but NOPE, the world kept turning, life went on at home, and it was actually WAY easier than I thought taking a 2 week break from social media and the internet. 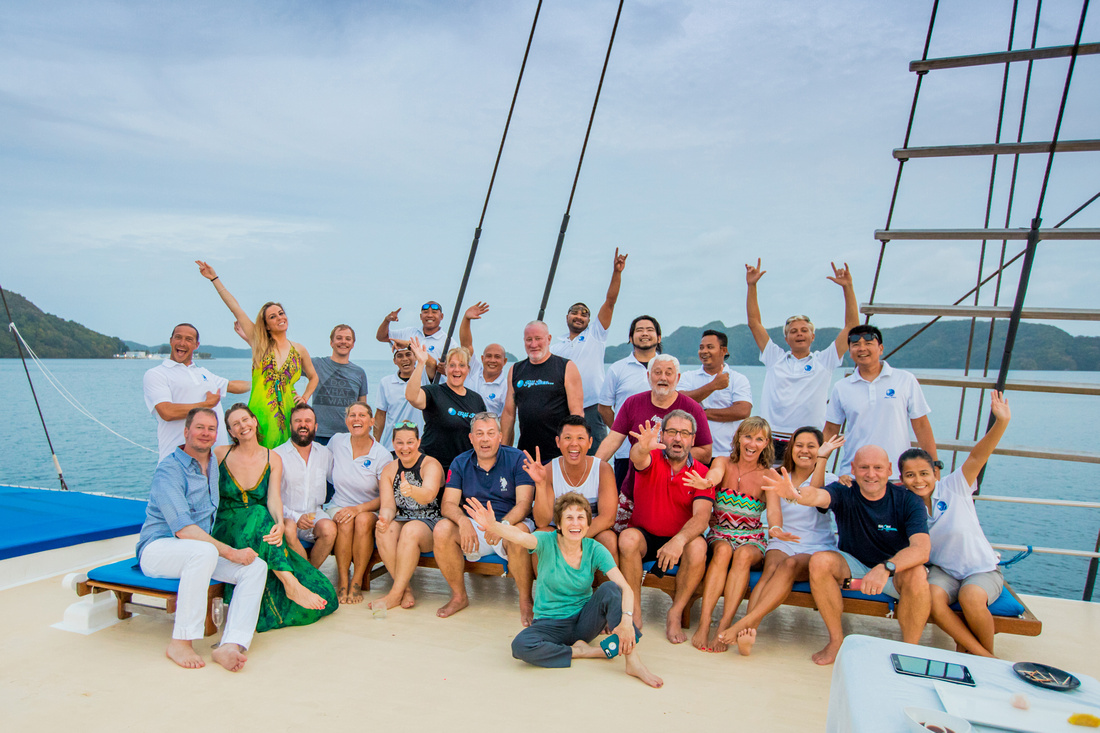 There were a group of 16 of us on a sailboat retrofitted as a scuba live aboard called the Palau Siren. The 40m S/Y Palau Siren was designed by divers for divers to provide superior ease and comfort. If you find yourself aboard the Palau Siren, you are a MAJOR scuba enthusiast, a dive instructor, or a marine biologist, because all you will do is explore pristine, remote dive sites 5 times a day and enjoy lavish accommodations and life on the deck of a sailboat.

Palau is famous NOT just for its crystal clear turquoise waters, but for having abundant sea life and pristine coral formations.  I am an advanced PADI scuba diver and I was diving so often that I actually studied and got my nitrox certification while on the boat, so I could dive more often, with less decompression times in between dives.  As a diver, usually if you see a shark or two or a turtle or a ray, you consider that a good dive.  So I wasn't prepared for the sheer numbers of sharks that we would see on each dive.  Because of the fast currents in Palau, you will see hundreds of sharks, giant mantas, huge schools of fish, giant cliffs of coral reefs, caverns to explore, and even wreck from World War II, the only litter you will find under the sea, but it has already been taken over by coral for many years now. The usual warning is:  “Beware of advanced sites where you find yourself flying in 3-4 knot currents surrounded by sharks”My favorite quote of the trip though was, "HAIR'S DRY, TIME TO DIVE, HAIR'S WET TIME TO EAT".  Which was a completely true statement, because you are always starving after a dive, and by the time you have digested your meal, it's time to get back into the ocean again! 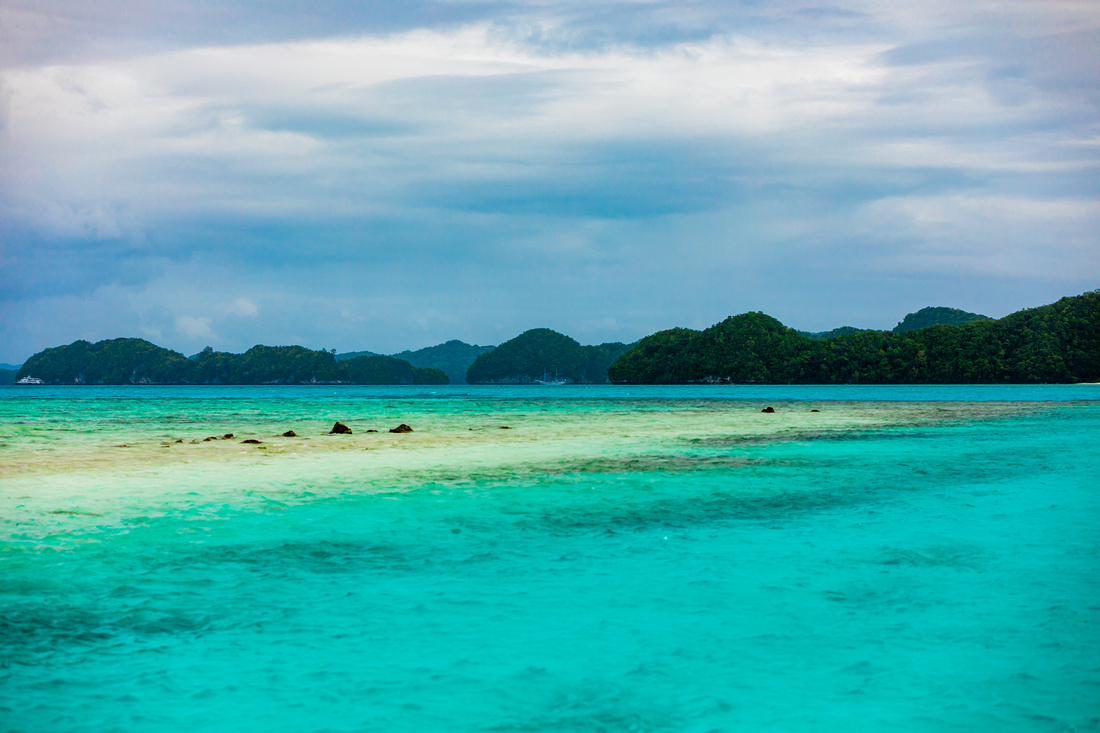 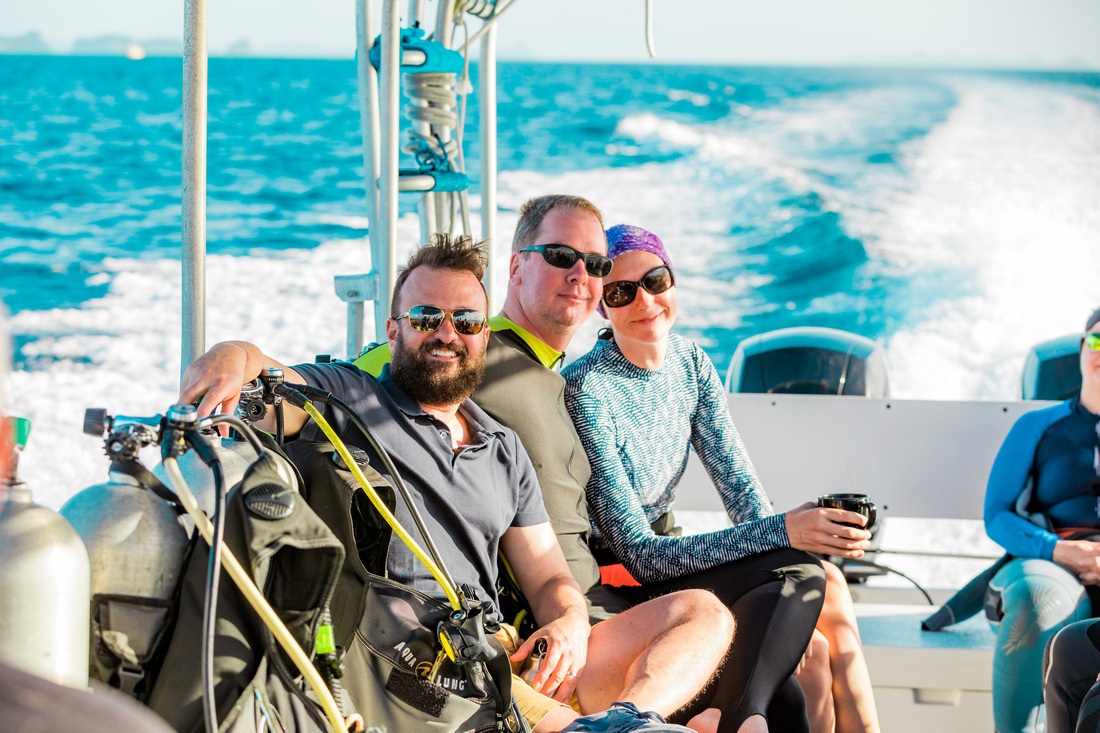 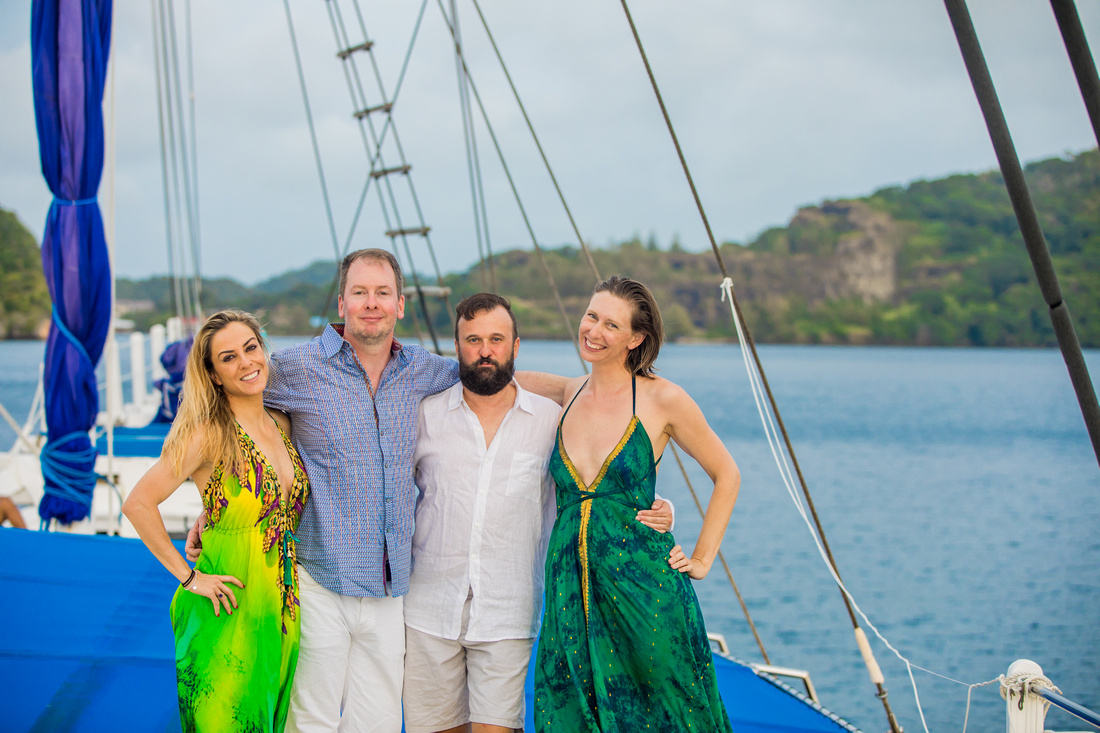 Palau is considered The Seventh Underwater Wonder of the World, because three major ocean currents meet in Palau, bringing nutrient-rich water and an enormous variety of marine life to this area. This confluence of currents gives Palau a remarkable diversity in diving venues ranging from stunning walls, coral gardens, and World War II wrecks to heart-pumping drift dives with grey reef sharks. The waters surrounding the Rock Islands teem with more than 1,500 varieties of fish and more than four times the number of coral species than is found in the Caribbean.

On a boat of this size, you spend a lot of time with each other and on the dive boats taking you to the dive sites, so dance-offs and karaoke have become our normal ritual with Ulu our skiff driver!  We couldn't really party or drink until after we were done diving for the day, so if you weren't participating in a night dive, you can enjoy cocktails at sunset or get a massage on the deck of the boat all while overlooking the most beautiful views of the islands of Palau!  You definitely lose track of the days and how long you have been out on the water.  It's strange to never touch your feet on land for 11 days and to just be diving constantly. I lost count of how many dives we did at some point, but I think when this trip was done I did about 40 scuba dives! I have spent more time underwater than above it the 11 days I was aboard the Palau Siren! 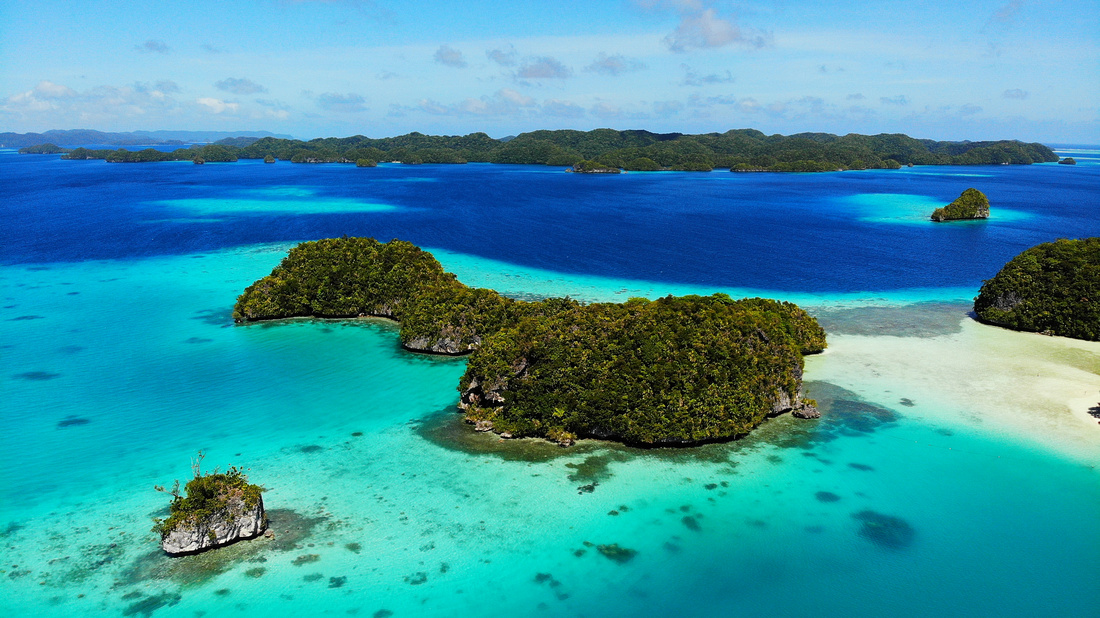 Palau had an indelible role in WW II. In the summer of 1944 American troops invaded the island of Peleliu. The air force bombed Japanese ships and installations to protect the flank of the upcoming invasion of the Philippines just to the northwest by MacArthur. There are still many war relics, tanks, planes, ships and weaponry scattered about and also sunken that are now against the law to remove. Because of this there are around 60 planes and ships sunken around Palau that you can scuba dive! Although it makes for amazing scuba diving, it's hard not to think about the lives of over 10,000 Japanese and 2000 Americans who died in this spot....sort of eery. 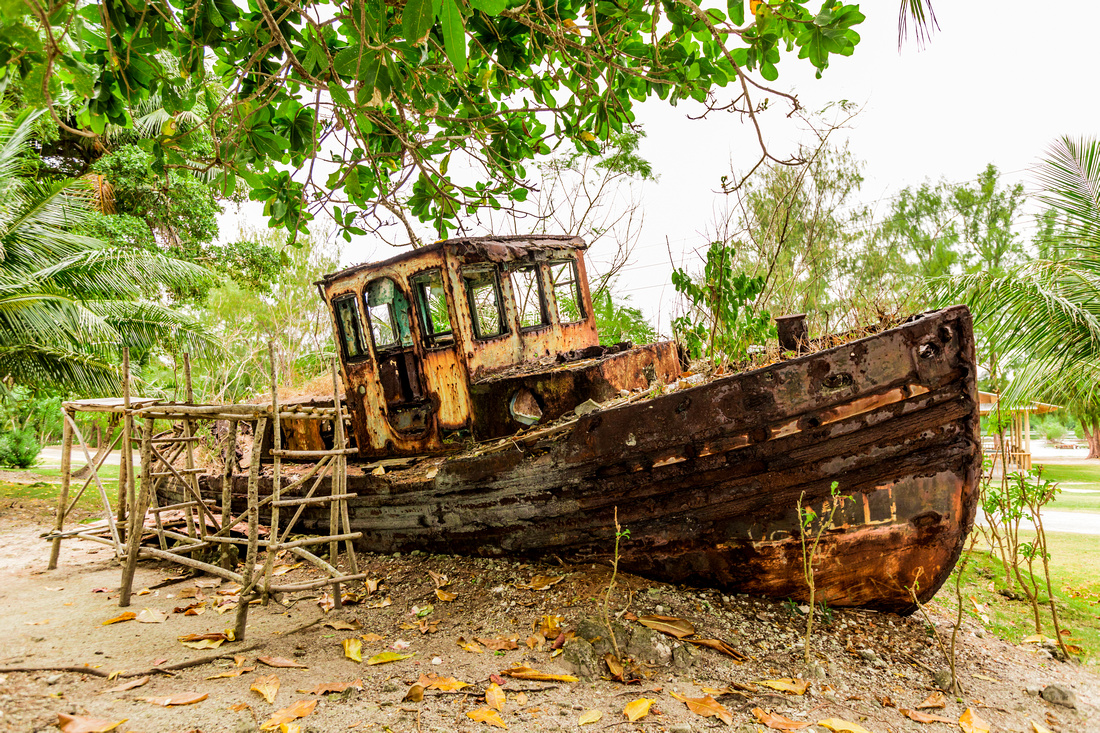 The underwater world here is amazing - so much coral and untouched marine life! The reefs here are so pristine and have not experienced bleaching like the Great Barrier Reef or Maldives., Most dive sites are world-class and unique, with memorable underwater features like blue holes, drop-offs, caverns, caves, wrecks and channels but the true “signature” dive site is known as Blue Corner. At Blue Corner, in 50-60 feet (15-18 m) of water, with currents sometimes up to 3 knots, you get to watch the “shark parade.” Where dozens of Gray reef sharks will be swarming around you at the edge of a wall as cleaner fish rid them of parasites.  If you love cuttlefish and most of us divers do, then Ngerchong Channel is the place to be. Giant cuttlefish can be found most times in the channel. Seeing this squid-like fish is like seeing a unicorn underwater!

Roby Donald Ducking on his 50th

And WHO KNEW that some sharks actually DO stop swimming and sleep at the bottom of the ocean? … In the Ulong Channel, the current is so still you can take your fins off and run across the bottom of the ocean, skipping across sleeping sharks. It’s usually nice and peaceful for these sharks here to take a snooze...that is until our group got there and we did streaking, slow-motion races with our fins off across the ocean floor skipping over sleeping sharks. They were definitely annoyed with us. 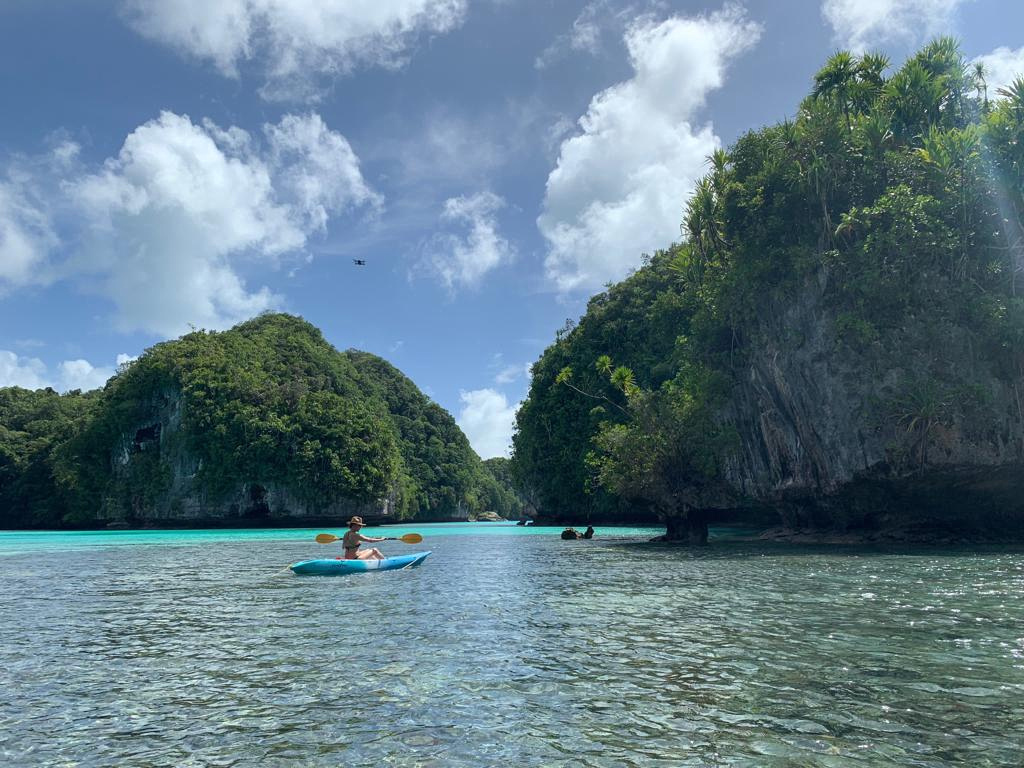 We DID have a few land adventures while exploring the islands of Palau.  We went kayaking through a hidden cave entrance into the lagoon inside of an island…You can only get to some of these hidden lagoons in low tide when the cave entrances are uncovered via kayak or by swimming and you have to get out before the tide disappears or you will get stuck inside a hidden lagoon!! I definitely preferred a kayak since sharks and crocodiles can also find refuge in some of these hidden lagoons.

Here's one bit of good news for the environment -- and your 2020 travel wish list.

After being closed for two years to allow its diminishing golden jellyfish population to recover, Ongeim'l Tketau Jellyfish Lake -- one of Palau's most famous attractions -- has reopened!!

Jellyfish Lake is a must-do while on a visit to Palau. Millions of years ago, jellyfish were trapped in this lake after a submerged reef rose from the sea, creating a landlocked saltwater lake. In this lake, the jellyfish have adapted to the new conditions by losing their sting since they have no natural predators. During the day the jellyfish follow the sun and stay at the surface. At night the jellyfish swim to a lower depth. In order to get to this lake, you have to boat over and hike through the jungle to a staircase that will bring you to this briny pond where you can snorkel into a sea of millions of jellyfish without a care in the world! 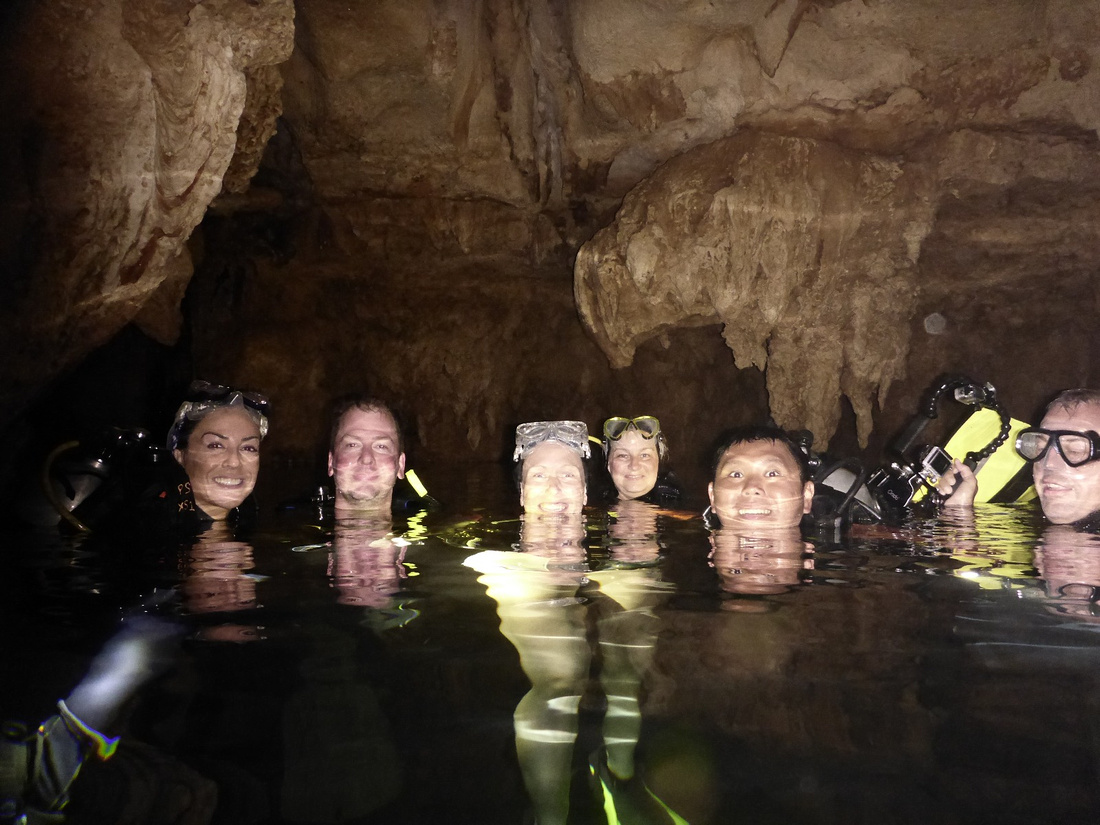 Our third "land adventure" was actual a scuba dive into Chandelier Cave. This adventure was straight out of "Goonies" and definitely was one of my favorite dives ever.  I say "land adventure" in parenthesis, because in order to reach the dry caves you have to enter the cave through an underwater entrance at the bottom of the ocean and swim in pitch blackness and surface inside of an air pocket inside of a cave system with stalactites and stalagmites.  Once you are inside of Chandelier Cave when you pop up into the air pockets, you can  actually take off your dive gear (which is super counterintuitive when you are technically on a scuba dive) and walk around and explore these “dry caves” and amazing mineral formations…So crazy!  Here is some information about this cave dive: 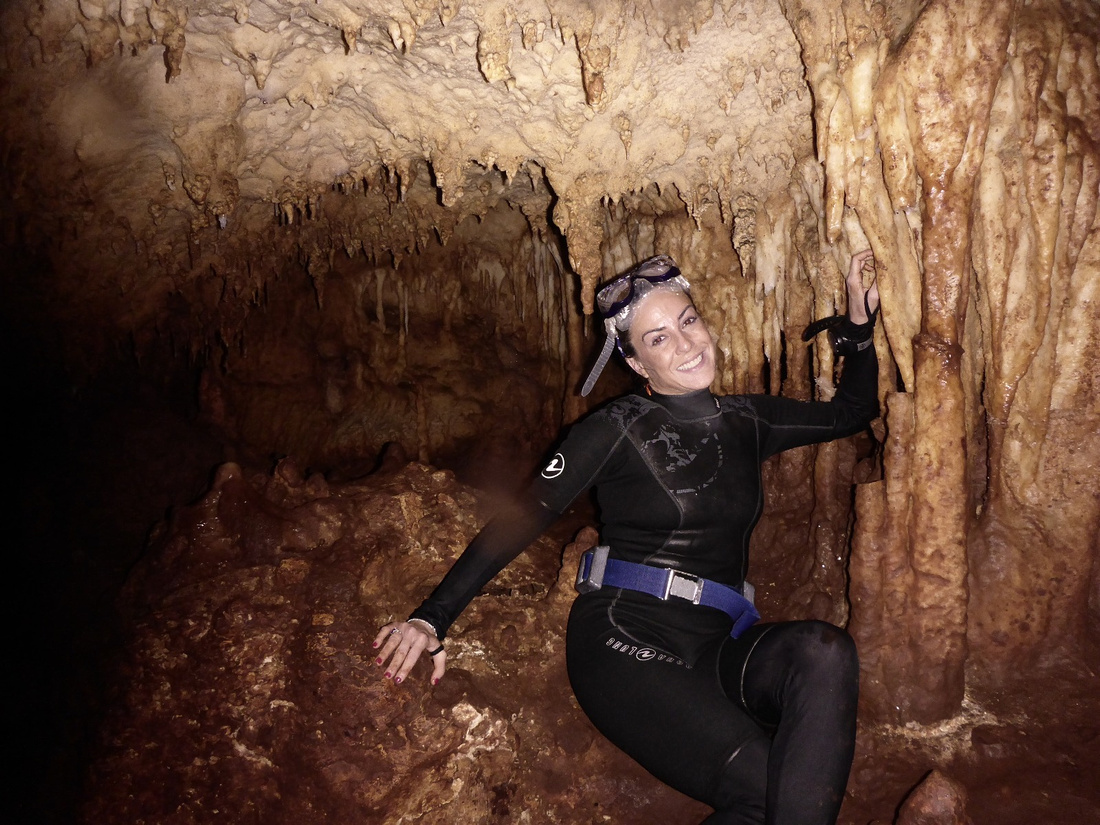 I remember the feeling of finally touching solid ground in Koror for the first time in 11 days after sailing around Palau.... There is nothing like having some girl time relaxing poolside and then having 11 days worth of emails and text messages flood back into your phone....Yeah....., but what's another day of ignoring messages?  So we just decided to have cocktails by the pool after 11 days on a boat and 40 hours of scuba diving, because we earned it! 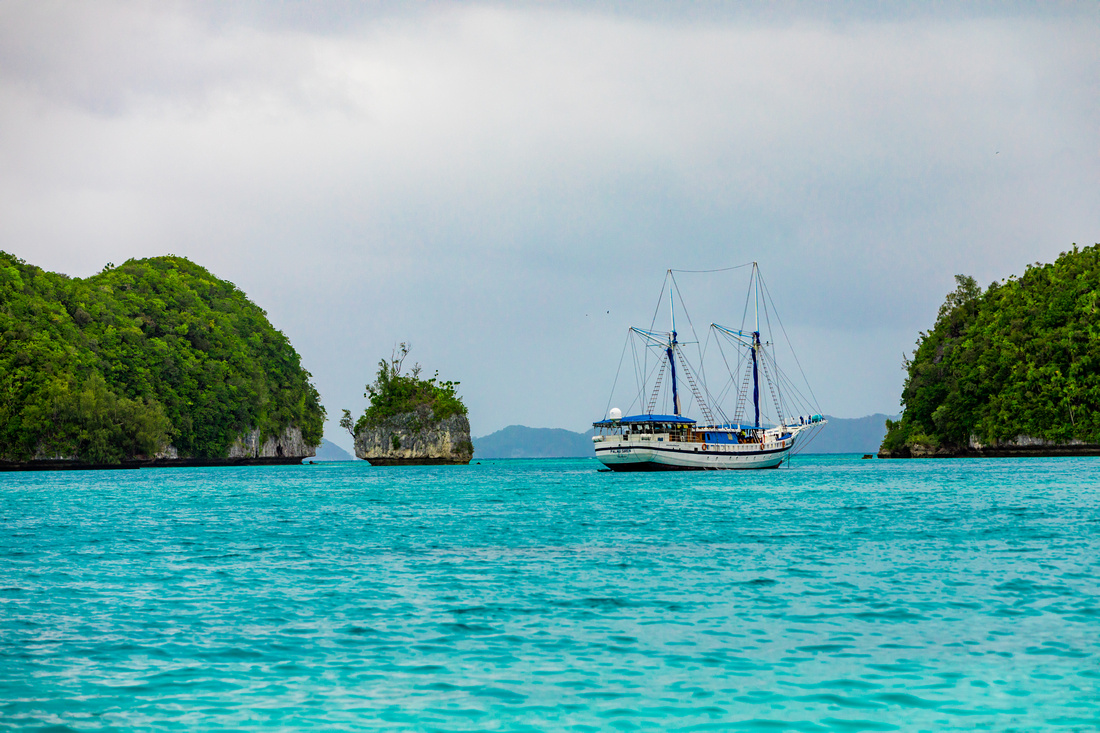 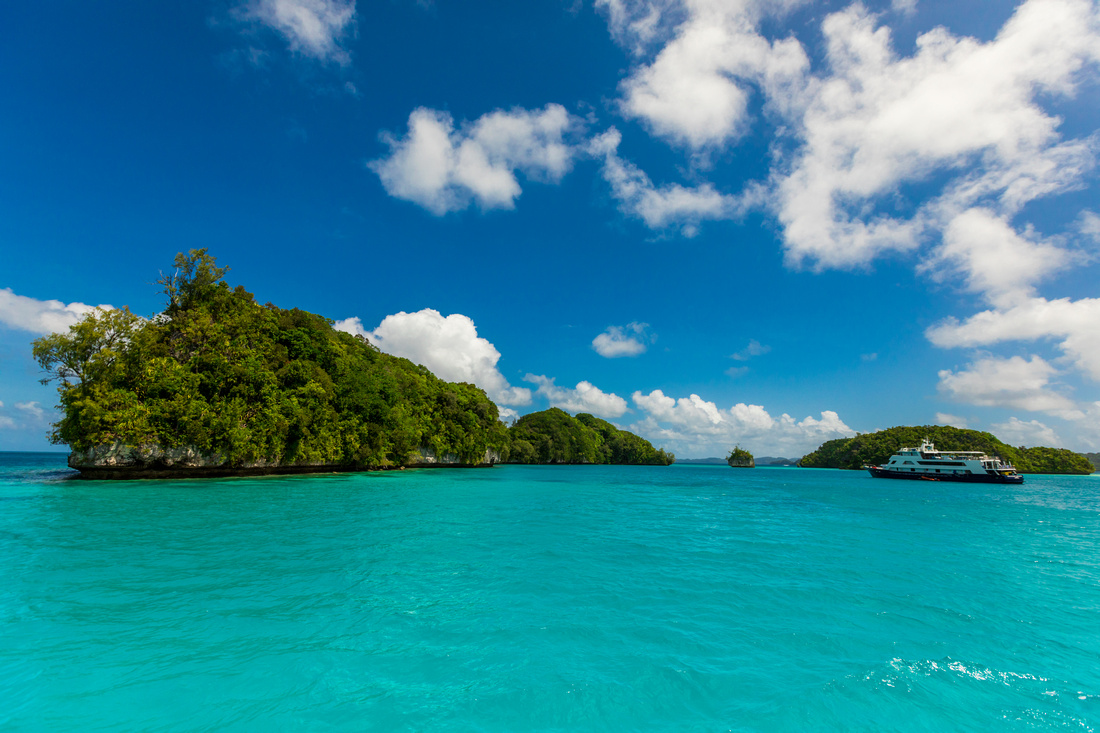 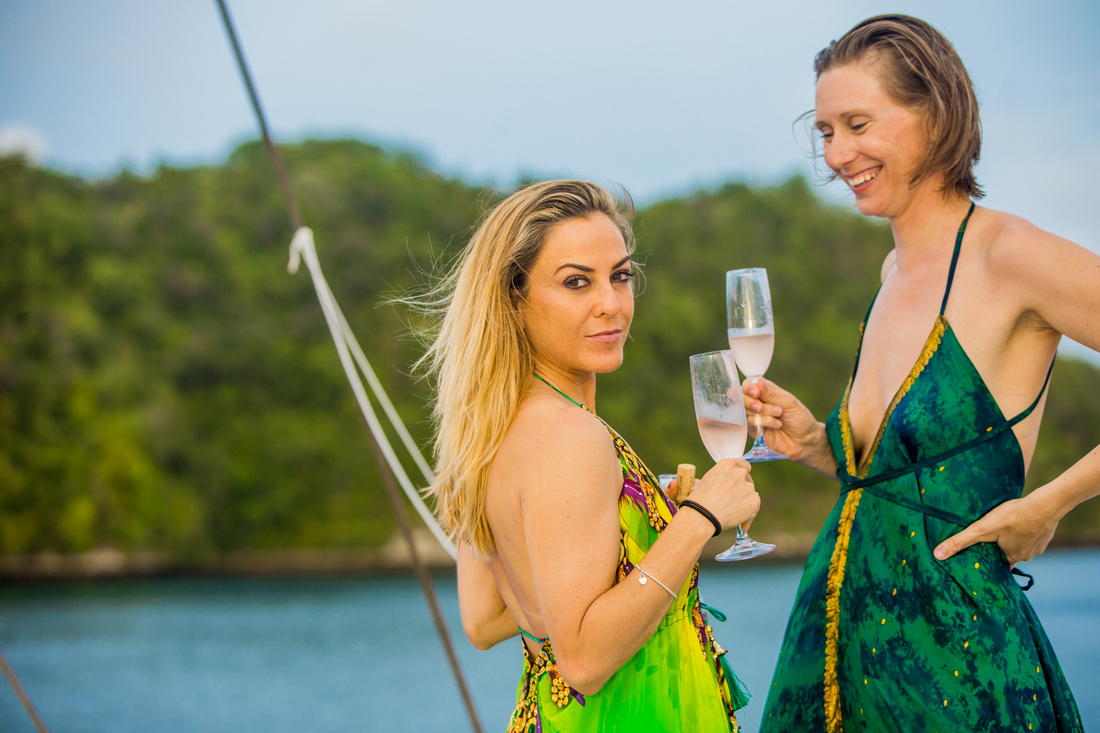 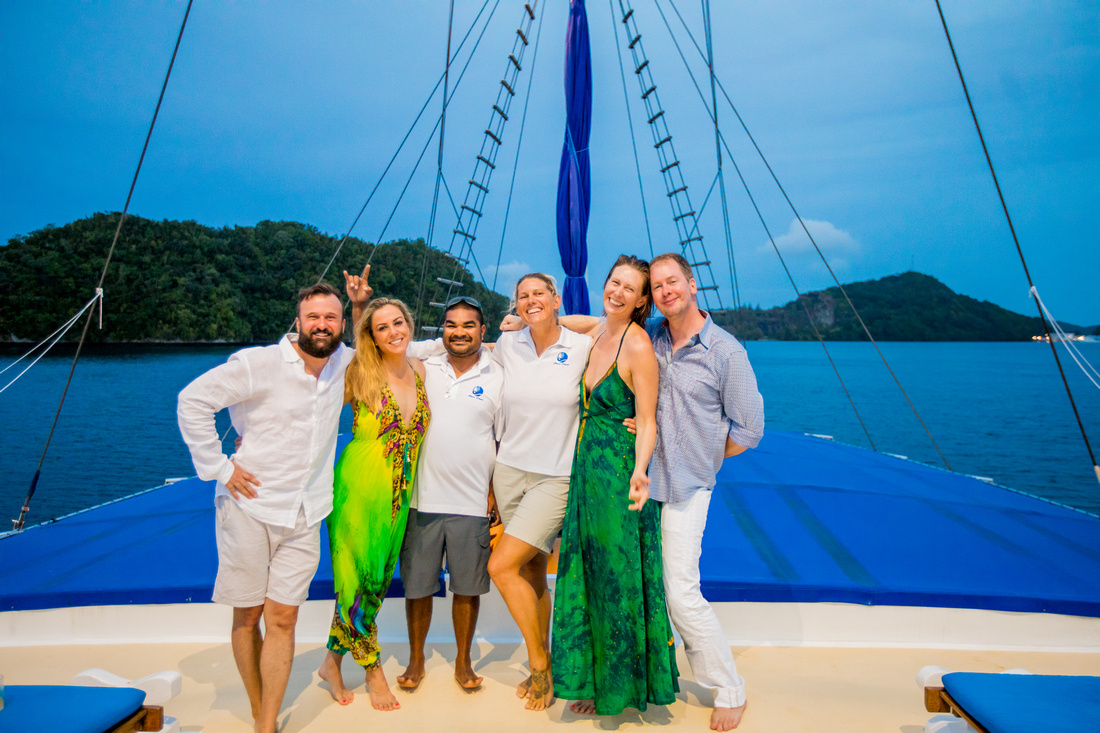 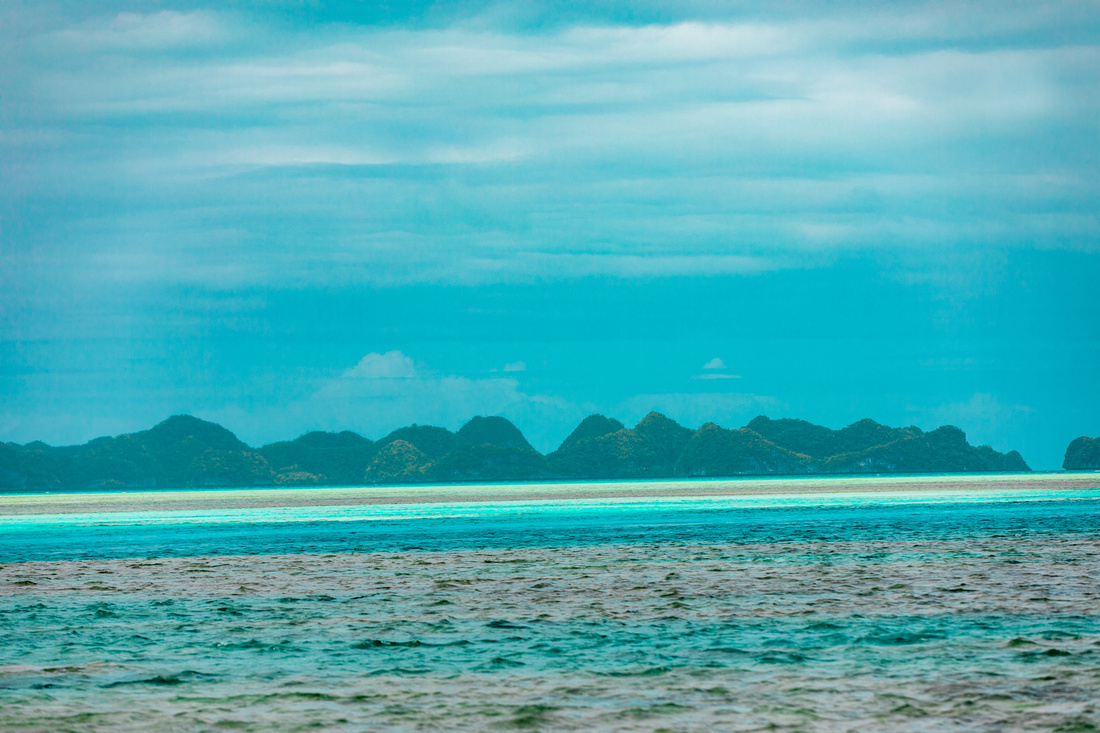