The Corn Palace Is A Marvel Of Agricultural Innovation And Terrible Puns. This a-maize-ing roadside attraction belongs in the Dad Joke Hall of Fame.

Welcome to Mitchell, South Dakota. Hope you like corn.

“I’M CORN-FUSED WHAT WE’RE DOING TODAY,” Sonya Moller says as I meet her on a corner in Mitchell, South Dakota. “We just chatting, or am I giving you a tour?”

I roll my eyes behind my sunglasses. “Did you really just say ‘corn-fused?’” I ask.

“We’ve got all kinds of ‘em!” she says excitedly as we look at a two-story mural of Crazy Horse, made completely of corn. “Our high school team is called the Kernels. Their mascot is Cornelius. You gotta embrace it!”

If Moller -- the local convention and visitors bureau’s chief operations officer -- is any indication, Mitchell may well be the corniest city in America. Not because of its excessive use of corn puns, though that helps.  But rather because no city is as singularly associated with a building as Mitchell is with its iconic arena/community center/43,000-square-foot piece of folk art known as the Corn Palace. And the people lean into it. Hard.

“Paris has the Eiffel Tower,” Moller says. “Mitchell has the icon of innovation: The Corn Palace.” 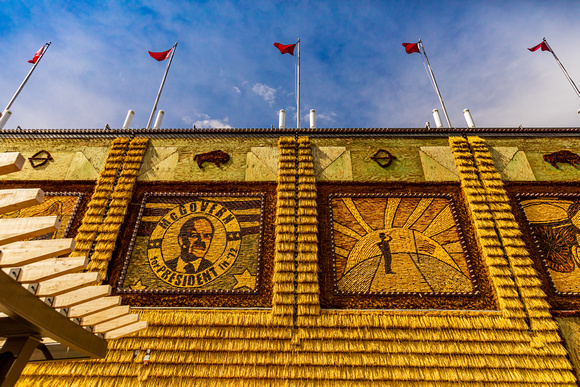 THE MITCHELL CORN PALACE IS THE ONLY CORN PALACE IN THE WORLD, a fact you’ll see on copious billboards lining Interstate 90 as you speed through South Dakota. If curiosity lures you off the highway, you’ll pull onto Mitchell’s small-town Main Street and find a bright-gold behemoth that looks like a tornado hit Moscow and dropped part of the Kremlin in the prairie.

A pair of rounded metal turrets and two massive domes stick into the sky, capping off walls adorned in six different types of native grass and multi-story murals depicting famous South Dakota sights. A marquee reading “South Dakota Home Grown” stands over the main entrance. All of it is made from multi-colored ears of corn.

And though it might be tempting to write off the Corn Palace as yet another kitschy South Dakota roadside attraction, its origins far predate the interstate. Or even the automobile. 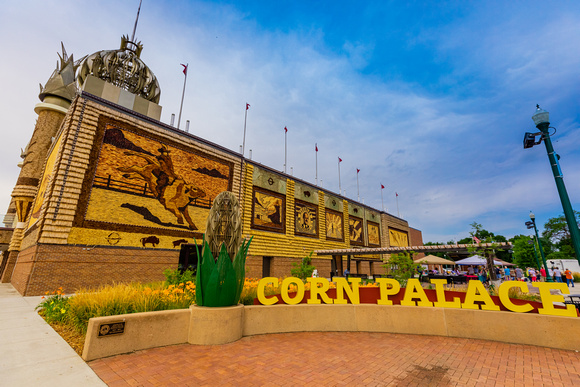 THE FIRST CORN PALACE WAS BUILT IN 1892, but back then it wasn’t the only one in the world. Or even in the state.

“There were several of them throughout South Dakota, and into Nebraska and Iowa,” Moller says as we stroll past the Corn-cession stand in the main concourse. Everything around us smells like popcorn. “It was a celebration for the farmers, for all their hard work on the harvest. They wanted to pay homage to agriculture. And over time, you know, for whatever reason, those communities did not maintain their corn palace and Mitchell thought, ‘hey, this is a cool thing. We're going to keep going.’”

And keep going they did: Through 128 years and three different locations until settling on the current one at 604 North Main Street in 1920. Though the building’s longevity is impressive, what’s perhaps most astounding is that Mitchell redoes the entire thing every year. 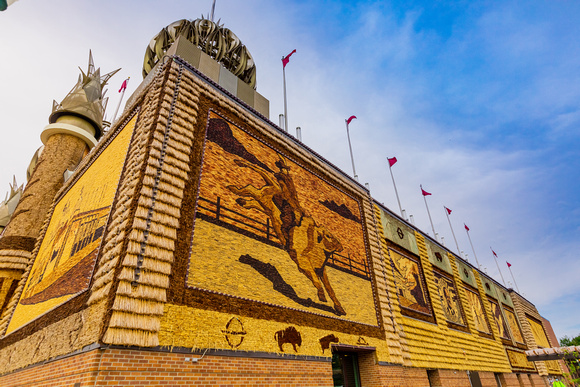 BEFORE SPRING PLANTING, the city decides on the theme for the murals that will adorn the Corn Palace for the coming year. This year’s, for example, was “South Dakota Home Grown.” Once the theme is established, a team of students from Dakota Wesleyan University designs the murals. Based on the color scheme, a single local farmer then grows over 375,000 ears of corn in 12 different varieties to match the motif.

Once harvest comes -- typically in late September -- the corn is soaked in giant water buckets to make it pliable. Giant tar paper outlines are plastered on the Corn Palace walls, with color coded sections determining which corn goes where. Workers then air-nail the corn to the tar paper in a sort of paint-by-numbers game until the entire palace is covered. Typically it’s ready by the beginning of December, but all of that is weather-dependent.

“We’re not gonna have people decorating when it’s 20 below and the wind is blowing,” says Moller.

The grass is generally replaced in June or July, when it shines the brightest green. So if you want to see the Corn Palace in its full technicolor glory, early summer is probably the best time to go. 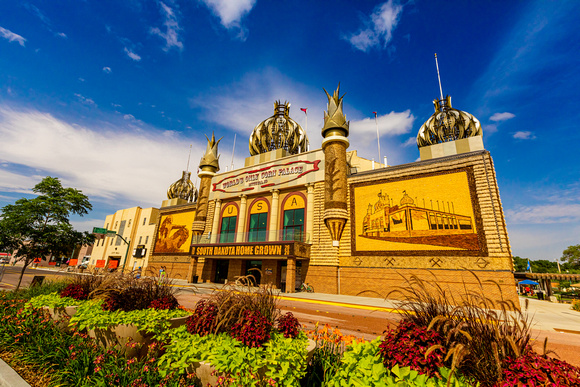 The entire project costs about $175,000, which Moller says is a small investment for something that draws half a million visitors annually.

Of course, droughts or floods can affect the crop. So some years there’s not enough corn to redo the whole thing and murals stay up for two years or more. Though the corn doesn’t rot, it fades, and birds pick off parts of the building.

“If you look to the left of the top part of the A over there, there's a piece hanging down,” Moller says as she points at the corn cobs on the marquee. “A pigeon jumped up there and thought it was going to pull it off and had a little fight with it. (So now) the corncob is still hanging there.” 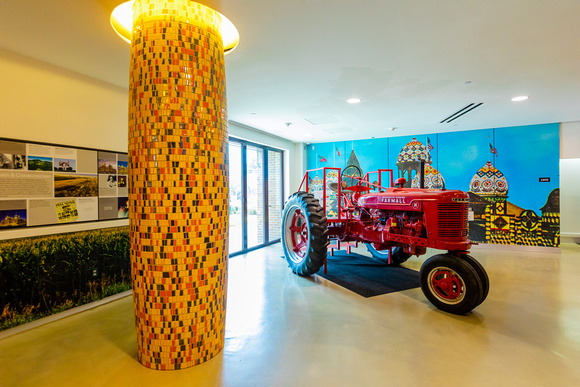 THOUGH YOU’LL NEVER FIND A SHORTAGE OF ROADSIDE GAWKERS strolling the corn-cob concourses of the Corn Palace and the gift shop that occupies the arena floor, it has practical uses too. It hosts 335 events a year, including high school and Dakota Wesleyan athletics, concerts, and festivals. On the sunny Wednesday I visited, a local farmers market was set up outside, and a local native tribe was performing dances on the lawn.

“It’s our community center,” says Moller, as she hands me one of the Corn Palace’s famous popcorn balls. “We own it. We love it. When I go on vacation I always wear my Corn Palace shirt. I make my kids wear theirs. And it’s a-MAIZ-ing how many people are like, ‘Hey, I’ve been there before!”

I’m not sure whether Moller realized she’s made another corn pun or not. But after an hour in the Corn Palace, I don’t even think to roll my eyes.